Colonial DJs was the featured entertainment at the 2014 VOW Bridal Event.  Special Thanks to Barbara Anderson of Style Events and Katherine Byrd of VOW Magazine for allowing us to be a part of the show.  The double booth space allowed us ample room for the dual monitor setup, uplights and music.  We had Howard’s Colonial DJs van parked out front with music to greet the guests as they arrived at the Virginia Beach Convention Center.  Colonial DJs Owner, Jeff Bristow was Co-Emcee with Luke Barton and handled announcements and prize giveaways as well as handled music throughout the entire show.  We had a great flow of traffic to the booth (pictured below) and we look forward to meeting new clients in the coming weeks.  We also want to thanks Kim Wadsworth, Vow Bride Magazine; Chris Lawson, Aviva Media Presentation; Dave Bell, Stage Right Lighting. 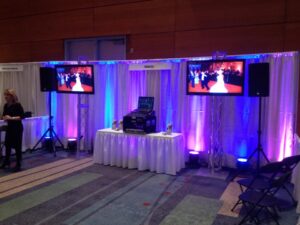